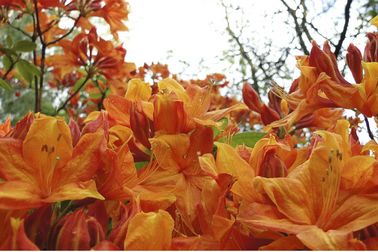 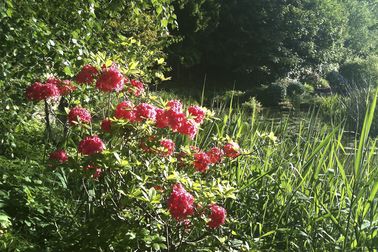 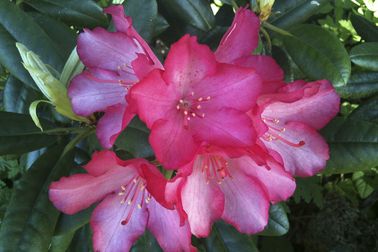 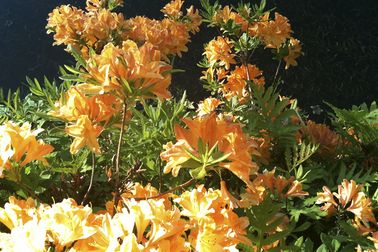 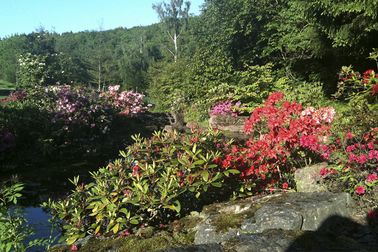 Baron Süsskind has spent almost every day since 1990 in his garden. A dozen islands have gradually emerged around the edge of the six and a half hectare lake, each representing a different theme.

The islands are connected by eleven bridges. Hints of oriental mythology are placed discretely among a wilderness of plants. The Park has now grown to eight hectares in size and offers exciting new impressions every month from April to October.

On the Temple Island cherry trees, magnolias and wild rhododendrons begin to blossom in April.

The Amphitheatre has seven tiers and can seat up to 1500 visitors . The outdoor stage is on the Theatre Island.

Along the brooks there are more then 300 species of wild rhododendron, the upper reaches are modelled in Chinese style (artificial landscape) with a Zen garden, the lower reaches in Japanese style (reproduction of nature).

The Shoji Gates are commonly found at the entrance to Shinto temple precincts. (Shinto is the traditional indigenous Japanese religion.)

The Red Bridge divides the park. The layout in front of the bridge has been inspired by Chinese principles of form. Beyond the bridge the Japanese influence is evident.

The Moon Gate connects the Private Garden with the Rhododendron Park.

"You can tell a garden by its gardener"

In the Rhododendron Park at Dennenlohe one can sense the spontaneity and creativity Baron Süsskind puts into his work.

He follows the principles of lush planting.

This refers to a system of planting that occurs naturally in the jungle. The shrubs and bushes are planted in close proximity, yet they are still able to develop their full natural growth potential. The concept of a wild landscape garden offered the best opportunity to put this into practice. The idea was to create an unstructured display that was by no means planned.

Baron Süsskind discovered his love for rhododendrons early in life. Originally native to the Himalayas, they were first shipped to Britain in the 18th century. Frequently only one plant out of a million would survive the long sea journey to reach its English port of destination intact.

Despite this fact, rhododendrons are very easy to look after, making them ideal park plants.

Bridges were a popular feature in landscape gardens of the 18th century. The impressionist painter and garden lover Claude Monet had a Japanese bridge in his garden  in Giverny which he frequently included in his paintings.

The location beside the castle pond is ideally suited for rhododendrons, as they thrive in a warm damp climate in humus-rich loam soil.

The lake generates a favourable micro-climate for rhododendrons. The water, ice-cold in February and March, lowers the air temperature and has a slowing effect on the plants. This means that the buds come out later in the year, avoiding damage from a late frost.

In April and May the water exudes warmth into the atmosphere and causes a slight rise in temperature. It can happen that during the mornings the Private Garden is covered in hoar frost, whereas the thermometer stays above zero in the Rhododendron Park.

The circular Moon Gate symbolises the symbiosis of Yin and Yang - according to old Chinese legend the threshold prevents the intrusion of evil spirits. There is a stunning view of the Red Bridge through the Moon Gate.

From the Heart, Dragon and Moor Islands a stone bridge leads to the Birch Island. Over the Sinus Bridge you get to the Theatre Island (where the amphitheatre is located) and a floating pontoon bridge then leads to the Wild Island (completely natural).

Via the hanging bridge with its two Shoji gates you reach the Bamboo Island before crossing some stepping stones in the water to arrive at the Temple Island. Finally you leave the Temple Island over the Chinese bridge which leads into the Landscape Garden.

The Moss Bridge, which crosses the lake to Moor Island, is covered with knotted tree trunks. The flowers are orange and yellow azaleas.

North of the Amphitheatre thousands of tulips and daffodils blossom in spring. In the background on the left is the Pontoon bridge located, which leads to the Theatre Island.

A waterfall runs down the 6 metre high wall of the pleasance, bordered by Japanese azaleas and Japanese primroses. In summertime three thousand pink and white water lilies bloom in the pool at the foot of the waterfall.

But the protagonist of the Dennenlohe Rhododendron park are of course the namesakes: rhododendrons and azaleas. Thousands plants, 500 rhododendrons and azaleas locations, various collections with more than 50 lilac, as many magnolia, Helleborus-, Hosta and Iris and Hemmerocalliswarieties are spread through the park and enchant themselves in April and July, which transforms the park into a colorful sea of blossoms.

Not for nothing the park is also a member of the Royal Horticultural Society and the international Botanic Gardens Conservation. The park is a dream, blend of islands and bridges, light and colors, overgrown rhododendron, during the Sino-Japanese creek and Asian temples and gates set a transcendent accent!

Resting after the park walk - in the orangery café or in the stables pub in the Grange - you should allow yourself at least 90 minutes of rest. 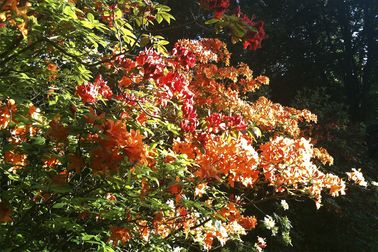 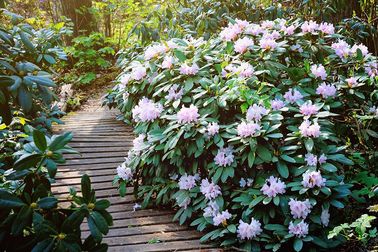 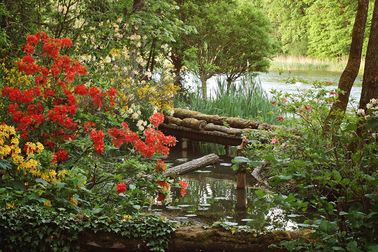 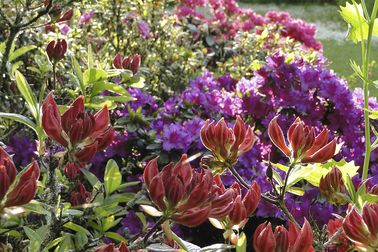 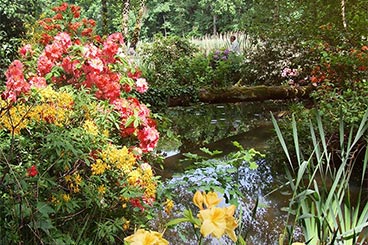 Castle Dennenlohe was built in 1734 with all its outbuildings and is considered one of the most beautiful baroque ensembles in Bavaria. The castle is surrounded by the largest park in southern Germany and Rhododendron by 25 hectares of landscaped gardens.

Sign up for our Newsletter and don´t miss any news

Dogs are always welcome. Of course, at events. Always keep your dog on a leash.